What is Amateur Satellite Radio?

Amateur satellite radio space communication is by-and-large related to conducting two way QSO between stations at distant geographic locations using earth-orbiting satellites which are usually dedicated to amateur radio use. Historically, this started in 1961 with the launch of OSCAR-1 amateur satellite in low earth orbit. Since then there has been an evergrowing interest among the ham community to venture into satellite radio communication. Some of the earlier amateur satellites which became quite popular were OSCAR-6 and OSCAR-7. At present, the amateur satellites consist of those featuring either linear transponders or FM cross-band repeaters. Most of them have a dedicated telemetry channel too. With modern-day micro miniaturization, we also have several smaller satellites called Cubesats and Nanosats.

Another interesting facet of amateur space radio communication is to bounce radio signals off the surface of the moon by using it as a passive reflector for communication between stations on earth. This form of communication is known as Earth-Moon-Earth (EME) mode. Although the use of EME amongst radio amateurs is not widespread, it is nevertheless, a very interesting mode that requires a good understanding of various scientific aspects related to circuit attenuation and calculation of link budget. EME is not meant for typical SSB radiotelephony but can be used for slow speed (QRSS) CW or certain Digi-modes which have been specially tailored and crafted for handling the challenges posed by EME. 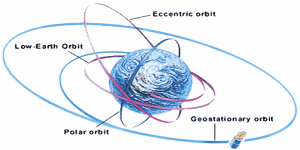 A variety of earth-orbiting satellites are available for use by amateur radio operators. Most of them are Low Earth Orbit (LEO) satellites which continuously orbit the earth with an orbit period of around 90-120 minutes depending on their altitude and eccentricity. LEO satellite orbits are usually at a high angle of inclination w.r.t the equator for maximum global coverage.

They orbit in what is called the polar orbit with some of these being sun-synchronous. Most of the modern amateur satellites use the 2m and 70cm amateur satellite radio bands for cross-band operation of uplink and downlink irrespective of whether they are transponder or repeater types. They are classified as either U/V or V/U satellites depending on whether they use VHF (2m) or UHF (70cm) for uplink/downlink. At any point in time, the available area covered on the surface of the earth by the satellite is called its footprint. The radius of the footprint is determined primarily by the altitude of the satellite at that instant in time and also by its squint angle. Typically, the footprint radius is between 1500-3500 Km. The satellites which deploy a linear transponder are usually more complex and also larger in size.

On rare occasions, some of these LEO satellites are spin-stabilized while in most cases they do not feature any stabilization and hence freely roll and tumble as they orbit around the earth. That’s why amateur LEO satellites do not have high gain directional antennas. The antennas on these satellites have to be omnidirectional in 3D to be able to effectively work in a rolling, pitching, and tumbling environment. The 2m antenna on LEO amateur satellites is usually a linearly polarized quarter-wave or half-wave antenna, while the 70cm antenna is a circularly polarised Canted Turnstile antenna.

An interesting exception of these LEO satellites is the International Space Station (ISS). It has a regular telemetry beacon transmission on the amateur satellite radio band. However, on prescheduled occasions, the astronauts on the ISS also conduct normal QSO with amateur operators around the world. SSTV picture transmissions are also occasionally made from the ISS.

The latest and perhaps the most interesting addition is the phase-4 transponder for amateur use on Es’hail-2 (QO-100) geosynchronous earth satellite which is parked over the equator at 25.9° East Longitude and altitude of 34000 km above the surface of the earth. The huge footprint of QO-100 simultaneously covers from Brazil in the west to Thailand in the east while covering entire Europe, Africa, and most of Asia. It provides a 250 kHz wide linear transponder which uses S-band (2.4 GHz) for uplink and X-band (10 GHz) satellite radio bands for downlink… Read More. 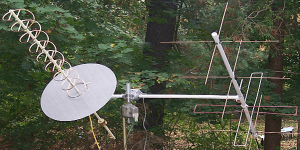 Amateur satellite radio communication using LEO satellites is fairly easy especially while using a dual-band (2m/70cm) FM transceiver and working via FM repeater type satellites. Many operators use dual-band VHF/UHF hand-held transceiver (HT) and a simple light-weight dual-band hand-held Yagi to effectively access and conduct QSO via FM amateur satellites. Although the LEO amateur satellites usually TX with very low power in the order of 0.5-1 Watt, the distance between the satellite and the ground operator is fairly short thus allowing a solid contact. For near overhead satellite passes, many operators have reported viable QSO even with a simple whip antenna and the HT.

Serious users usually set up proper base-station dual-band rigs with a permanent rooftop antenna for better results. In such a case, best results are obtained using an azimuth/elevation (Az/El) rotator mounted crossed-Yagi or helical antennas. These types of antennas feature circular polarization and are best suited to minimize signal flutter and fading on account of rotation of signal polarization caused due to Faraday Rotation and constant tumbling of satellite in orbit. Another antenna option for working with FM amateur satellites is to use a non-rotatable, omnidirectional antenna with a radiation pattern that covers the entire sky. Two such popular antennas are the Egg-beater antenna and the Quadrifilar Helical antenna (QHA).

However, while working with most linear transponder type satellites these omnidirectional antennas may fall short in performance when attempting to effectively access the satellites at low elevation angles near the horizon. During high angle overhead passes, all antennas tend to work. If possible, it is always best to use Az/El rotatable Yagi or Helix for reliable all-round communication capability. Another important factor that plays a vital role in LEO satellite communication is the Doppler effect. As the satellite rises above the horizon and moves along its orbital path at very high velocity across the sky before eventually sinking below the horizon, the distance between the earth station and the satellite constantly keeps changing.

FM satellite radio communication does not pose much problem due to the inherent capture effect of FM demodulators. The Doppler shift can easily be adjusted manually while conducting a QSO. However, while working SSB through linear transponder satellites, continuous tracking and correction (preferably automated) of Doppler shift become paramount since even a very small shift in frequency makes it difficult to comfortably copy SSB… Read More. 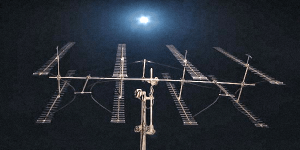 Earth-Moon-Earth (EME) communication often also known as Moonbounce has been in vogue on amateur radio since way back as 1961. It is a mode of communication which is not meant for everybody and certainly not for the faint-hearted. EME entails considerable financial outlay as well as a good understanding of various facets of weak signal long-range communication, atmospheric and galactic noise, noise temperature of the communication environment, antennas and propagation, etc.

EME is more like Radar contact where the moon is used as a passive reflecting surface for radio signals. As a radar reflector, the moon is not too efficient at VHF and UHF frequencies with the reflection co-efficient being in the order of 6-7% which however improves considerably on 23cm and higher frequency bands. A small fraction of the signal reflects while most of it either gets absorbed or scattered. The distance between the earth and moon is around 384,400 Km which makes the total signal return path length around 768,800 Km. On account of the large distance and poor reflection co-efficient of the lunar surface, the approximate path loss for the signal is around 250-270 dB on 2m-23cm frequencies typically used for EME communication.

Only narrow-band, slow-speed communication modes are therefore practically feasible to achieve reasonable Signal-to-Noise ratio (SNR) needed for sustainable communication. Till the advent of extreme weak signal capable digital modes like JT65, only slow rate CW was possible which too required hefty stacked array Yagi or Helical antenna with 20-30 dBi gain and a TX power of 500-1000 Watts.

Nowadays, JT65 modes make it possible to use relatively modest equipment since this mode has the ability to reliably receive and decode signals at around -30 dB (more likely -27 dB) below the normal SSB noise floor. As a consequence, the JT65 EME stations can now run around 100 watts into 12-15 dBi gain modest antenna and yet expect to work via EME. However, a low-noise preamplifier mounted at the antenna head with a Noise Figure (NF) below 1 dB (preferably 0.5 dB) is almost a must.