The study of principles of propagation of electromagnetic waves and acquiring a reasonably good working knowledge of radio propagation go a long way in enhancing the quality of on-air experience for any amateur radio station operator. It is a complex subject where many variables of nature come into play. Radiofrequency spectrum is extremely wide, starting at ELF, VLF, LF and going all the way through MF, HF, VHF, and UHF into the upper microwave spectrum, L, S, C, X, Ku, K bands and beyond.

The propagation behavior through various mediums at different frequency bands varies drastically. As amateur radio operators, we are mostly concerned with MF, HF, VHF, UHF and lower segment of the microwave spectrum. Most challenging of all these is HF radio propagation. HF radio propagation is influenced significantly by several exogenous factors like seasons, geo-magnetic field variations, normal solar activity and transient coronal ejections from the sun. Not only the fundamental principles but also the ability to reasonably forecast propagation possibilities based on various geophysical parameters and solar radiation data metrics is important.

When a suitable antenna is driven by a radio transmitter it radiates energy into free space in the form of Electromagnetic (EM) Waves. EM waves are produced by a complex mechanism. In close vicinity to the antenna (within 1/2λ to 1λ), the energy field is called induction field. Rapid and progressive transformation takes place in this region going through Rayleigh (reactive) and Fresnel (non-reactive) regions. Finally EM wave is formed which is fully detached from the antenna as it propagates into the Far field region. EM wave carries the entire energy that was passed onto it and travels away into free space at the velocity of light. As it travels, its behavior is governed by the laws of physics and the properties of the medium. The radio propagation medium may not be homogenous and hence the EM wave can get subjected to various physical phenomena like reflection, refraction, absorption, diffraction, etc… Read More. 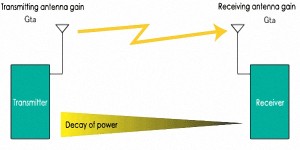 Free Space radio propagation as the term suggests refers to unrestricted propagation through a nearly homogenous medium in the absence of any kind of objects or particle/energy fields that could alter propagation. For practical purpose, radio propagation through inter-planetary space or a terrestrial point-to-point mode when not influenced by presence of earth, buildings, other man-made structures and topological entities like hill, mountains, etc is considered as Free Space propagation. A microwave terrestrial relay link from one tower to another is a classical example. However, in practical scenarios where VHF/UHF links are often influenced by anomalies of weather, causing wave bending due to atmospheric refractive index gradient is also included in this mode… Read More. 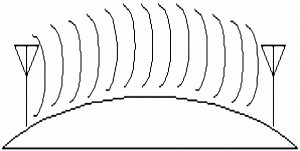 The term surface Wave is often incorrectly but interchangeably used with Ground Wave. Surface wave is a subset of Ground-wave which also includes Direct waves and Ground reflected waves. Surface wave radio propagation is sensitive to polarization. Practical manifestation of surface waves only occur with vertically polarized signals. Horizontally polarized signals get quickly absorbed by the earth’s soil and hence cannot propagate far enough. Although it is imperative to have vertically polarized TX antenna, ideally both TX and RX antennas should be vertically polarized. This avoids cross-polarization losses. Surface waves only manifest on lower bands like VLF, LF, MF and lower portion of HF. The coverage reduces with frequency whereas better soil conductivity enhances it… Read More. 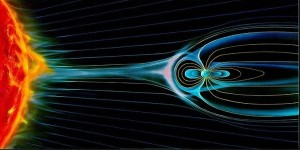 Shortwave HF radio propagation is almost solely dependent on the presence of Ionosphere. If there was no ionosphere, HF radio would have been limited to short-range surface waves and that too on the lower part of the HF spectrum. Middle and upper HF bands would have been totally dead for terrestrial radio. Unlike VHF/UHF, even the short distance line-of-sight radio propagation would not happen. Due to longer wavelengths on HF, the first Fresnel zone clearance of earth surface would be difficult. Perhaps HF would have served only for low data rate space radio. Fortunately ionosphere exists. It exists only due to a continuous stream of sub-atomic particles and high energy emissions from the sun that travel at high velocity across the solar system. It is called Solar Wind. It interacts with earth’s upper atmosphere to form the ionosphere… Read More. 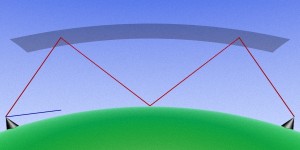 The real utility of HF radio stems from its ability to leverage the properties of Ionosphere to render global communication. Ionosphere is not a homogenous reflector. It is a huge canopy surrounding the earth starting at 50 Km height and goes up to 600 Km or more. It has multiple graded layers of ionized charge particles which are dynamic and turbulent with time-variant properties. The height and density gradients vary diurnally, seasonally and in accordance with solar activity. Solar activity varies continuously with time and displays a 28 day and a 11 year cycle. The space between earth and ionosphere forms a 3D concentric spherical duct. HF radio waves from the TX antenna bounces back and forth between earth and ionosphere as it hops around the world. This process is complex due to the dynamic nature of ionosphere… Read More. 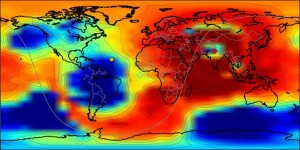 Following and forecasting propagation becomes significant in context of HF radio. At VHF/UHF or higher, the communication link behavior is far easier to compute. At these frequencies, the propagation is stable with very few time or seasonally varying parameters. Such parametric variants have small effect which are factored in by allowing adequate margins. This applies to MF and lower frequencies too. However, HF sky-wave propagation is different. Ionospheric multi-skip propagation circuits are like daisy-chains. Along the path, at each ionospheric contact point, the propagating wave encounters a distinctively different behavior. The ionospheric properties at each of these points constantly alter with earth’s rotation, declination and changing solar activity. Hence, the overall HF circuit performance varies on a minute-to-minute basis… Read More. 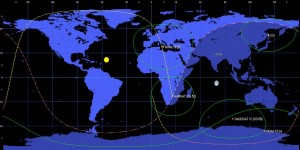